We (Fenris Wolf and Ragnar Thorfinn) will be presenting two events to accompany our work in the exhibition Scotland Small? at the Royal Scottish Academy in two weeks. Here is some information about the events: 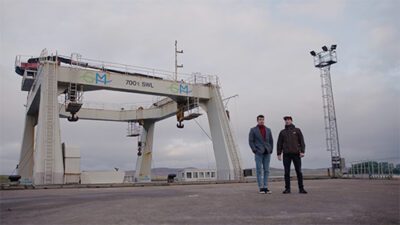 Orcadia: A Fenris and Ragnar Story is a short documentary film by Scottish filmmaker Glen Thomson. The film follows artists James Alexander McKenzie and Daniel O’Dempsey as they navigate life on the Orcadian Isles and chronicles their immersion in its rich culture. They discuss the impact Orkney has had on them, and the philosophy behind Fenris Wolf and Ragnar Thorfinn. Orcadia documents McKenzie and O’Dempsey’s collaborative practice, and the first two acts of the experimental play that they developed during their residency.

Fenris Wolf and Ragnar Thorfinn is an artist collective consisting of James Alexander McKenzie and Daniel O’Dempsey as abiding contributors and includes anyone that the pair collaborate with when operating as Fenris Wolf and Ragnar Thorfinn. It is a vehicle for experimentation, collaboration and developing ideas within the realms of fine art, performance art, spoken word, poetry, music, and theatre.

You can register to attend our events here.

Earth is Never Dry is a short film created by students of Napier University. Sections of the film were shot in our most recently acquired project, located in Granton on West Shore Road. 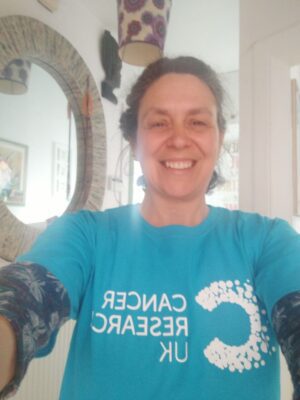 part. I have been questioning myself over and over of what sits right since my life is full of change at present.

I would like to offer sessions in person on Mondays and Fridays at Studio 6.02, 12:00 -12:30, any donation to go to the link below. The sessions will be 30 minutes long. Ideal to take a pause, breathe, switch off and go back to create after and still be able to have lunch!

this is the link to book your space by selecting the dates you wish to come. You just need to bring yourself. 6.02 is as you come out of the lift, turn left, then through the double doors, the door in front of you. 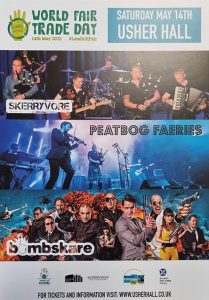 A wee message to invite Edinburgh Palette residents and friends to an awesome, high energy World Fair Trade Day Concert this Saturday at The Usher Hall, with Skerryvore, Peatbog Faeries & Bombskare. https://www.usherhall.co.uk/whats-on/world-fair-trade-day-gathering-2022 Tickets available by phone or online and with discount code WFTRADE22 at checkout, tickets are just £12 between now and Friday 🎸🪕🥁🎻🎺🎻🎸🥁😃

We are four yoga teachers and we’re excited to be opening a studio in the building. We each have different styles and influences – iyengar, hatha, zen, astanga – but one thing in common. We’re passionate about offering yoga that benefits all bodies, all ages, all abilities and flexibilities.

Contact us on yogacollective.edinburgh@gmail.com and look out for class times, coming soon.

Drop us an email if you’re interested, we’d love to see you!

Body Symphonies 300 hours Yoga Teacher and Practitioner Training is reaching the end of its first 15 months of life!

We are looking for 5-6 people, no need for them to be the same people, beginners please or new to yoga even, to come and be taught by the trainees on the following dates and times:

Please send an email to annamaria@bodysymphonies.co.uk  to reserve your space.

We are CoCo Counselling in Communities (www.cocoed.org.uk), a small not-for-profit 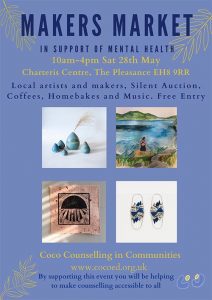 counselling organisation based in the Southside of Edinburgh. We offer one to one counselling and psychotherapy to all those in the community seeking support for their mental health. Our premise is that all people should have access to affordable counselling within their community, regardless of their ability to pay. In addition to our indoor work, we offer a unique ‘walk and talk’ service for those who seek solace in the outdoors.

On Saturday 28th May we will be holding a Makers Market to raise funds for our much-needed affordable counselling service. The market will consist of around 14 traders, all local makers and artists. In addition, there will be refreshments, music and a silent auction where people can bid for a range of prizes.

Are you a talented home potter?

Could you impress Keith and Rich with your makes?

Or, do you know someone who could?

The Great Pottery Throw Down is looking for applicants for the new series. 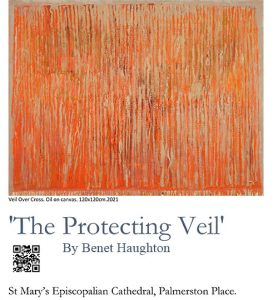 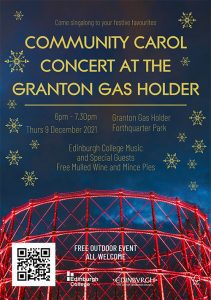 It is a free outdoor event, with some complimentary mulled wine and mince pies on offer provided by North Edinburgh Arts café. The music will be led by the Edinburgh College music department, including the Edinburgh College Chamber Choir, String Ensemble and Clarinet Quartet. There will be carol sheets for singing along!