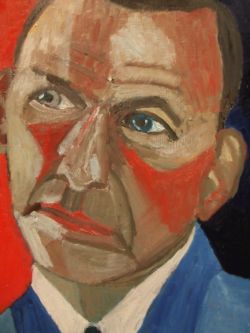 For painter Jamie King, his craft acts as a livelihood and also a lifeline, by allowing him to throw himself into other people’s stories.  There are many layers to his work, the main lifeblood of which is people, whether they are engaging with him one-on-one or passing him in a crowd.

Faces fascinate King and, to him, can at once reveal much about person’s past experience and present mood.  He believes this is true of the old in particular, whose struggles and hardships are often literally written across their faces.  The recent compositions on display feature famous public figures, from past and present, who have had private struggles with their mental health.  King renders them with ambiguous expressions and in vibrant colour palettes – King’s way of inviting the viewer to look deeper than his brushstrokes and reimagine the celebrities’ stories for themselves.

Born in Edinburgh, King spent his youth in West Lothian before returning to his native city – formal studies in the arts at Telford College and a studio space in St. Margaret’s House followed.  The upcoming exhibition of this well-respected resident artist will be held in Gallery 2 on the third floor.