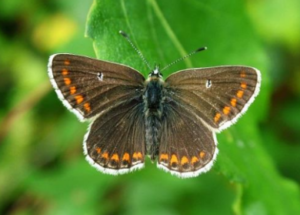 A network of green roofs in the city to offer new homes to Edinburgh’s butterfly.

The Northern Brown Argus really is Edinburgh’s butterfly. For years it existed on Arthur’s Seat with Scottish butterfly watchers in the 1700’s assuming it was just a slightly different version of the Brown Argus which it closely resembles. But in 1793, closer inspection revealed that it was indeed a completely new species.

Sadly, after its discovery it became a highly prized addition to the collections of butterfly enthusiasts. Over-zealous collecting plus land use changes at Holyrood including the building of a road through the last remaining population strongholds of this species, meant that the iconic population of Northern Brown Argus butterflies had disappeared by
1869; less than 100 years after it was first discovered.

But that’s not the end of the story: in 2005 the Northern Brown Argus was re-discovered at Holyrood and the population has continued to increase annually.

Now The Royal Botanic Garden in partnership with Butterfly Conservation Scotland are welcoming this beautiful butterfly back by providing all its requirements – space, food for adults and caterpillars and shelter. This is where green roofs come in: we are aiming to plant patches of the favourite food plants of the butterfly caterpillars – common rock-rose – on green roofs surrounding Arthur’s Seat and further afield to see if the existing population in the Park expands to colonise these new specially created habitats. Green roofs are perfect because the butterfly is usually found living at height and these roofs can provide warmth and shelter to butterflies that find themselves in the city.

If you have a green roof and would like to contribute – all you need to do is provide a little space – less than 2m square – and we will provide the plants, growing material, containers and advice.

If you would like to be involved please contact:
Leonie Alexander
Urban Biodiversity Project Officer RBGE
E: l.alexander@rbge.ac.uk
T: 0131 999 3019
This project is a collaboration between the Royal Botanic Garden Edinburgh (RBGE) and Butterfly Conservation
Scotland as part of their Urban Butterfly Project and is part of Edinburgh Living Landscape.