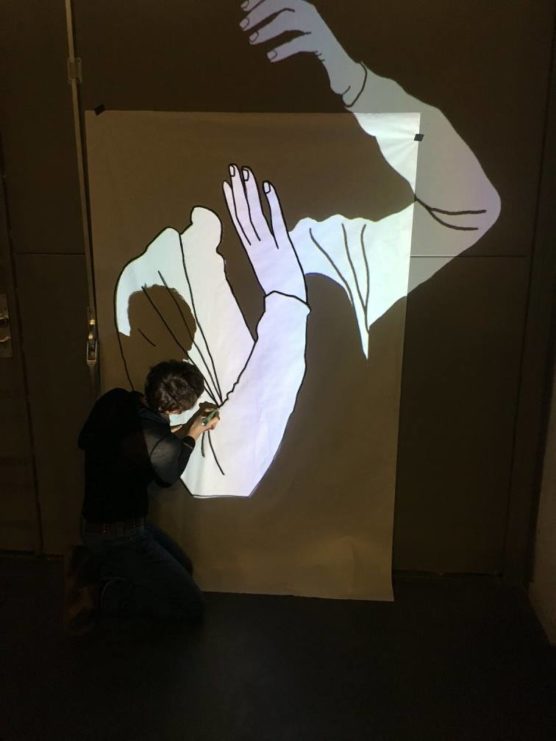 A 3 week, Visual Audio Hub within the 3 galleries at St Margaret’s House – a residency between 3 AV artists to explore experiment and dive into the realms of lights visuals and sounds to develop immersive experience art forms.

The start of a collaboration to give space and time to three AV artists who normally meet and work on events in the music industry. The short timescale of Festivals and music events makes it always difficult for visual artists to test and develop their art forms, the set-up is short and the opportunity for musicians to have pre-production work rarely occurs.

This 3 week residency will be the opportunity for each artist to share and use the 3 galleries setting up their own installations inviting musicians and other artists to collaborate and todevelop particular aspects of their practices.

A closing event on Friday 30 March 2018 will welcome the public to experience in all 3 galleries an immersive audio visual installation created by all 3 artists with traces of the works developed through the residency on various collaborations.

During this residency the artist will explore her ongoing collaboration with RedStone Press, a young record label from the North of Scotland (Morayshire), with sound producer Ethan Harfield (Pseudopolis) & DJ Lewis Lowe – the residency will give time to the artists to explore a visual and sound installation to launch their record label this coming year in Glasgow, Scotland – as well as develop ideas around a future trip to Uganda where they will be presenting their work and collaborating with East African artists as part of the Doa Doa Market (May 2018).

Time will also be taken during this residency to work with sound producer Ian Thompson, on visuals for his record label RoundHouse (Berwick-upon-Tweed), a collaborative project with artists from Travelled Music and from the various tours he has been organising around Europe Russia and the USA.

This residency will also be a time to reflect on a collective project, JustaHub, a mobile studio concept, that will be discussed and shared in Africa during their showcase in DoaDoa Market. A project for artists designers and performers created to facilitate creative collaborations across the borders and produce art community projects in both countries in partnership with Bayimba Foundation and Afrika Arts Collective, Uganda.

Finally the artist will be working in collaboration with the Golden Trailer Collective, starting the main ideas around visuals and designs towards a play called Magical Plastic Chicken, that will be performed in the Main Auditorium of the Old State Cinema at the Hidden Door Festival in May-June 2018.

Magical Plastic Chicken is a black comedy about being degraded and breaking free. A woman of colour buys a toy chicken from the market. She brings it to the airport, where the chicken is suspected to be a bomb and causes an uproar. As it turns out, the chicken has magical powers. Based on a true story and featuring original live music.
Magical Plastic Chicken is written by Uma Dragon (recent winner of the New Playwrights’ Award from Playwrights’ Studio Scotland) and is brought to life by The Golden Trailer Collective. Golden Trailer takes tremendous pleasure in bringing odd mixes of people together in strange locations, usually involving extremely large metal objects.