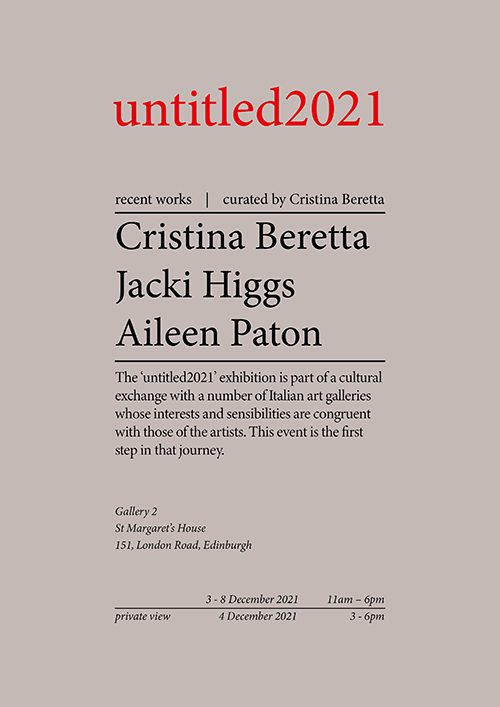 The ‘untitled2021’ exhibition is part of a cultural exchange with a number of Italian art galleries whose interests and sensibilities are congruent with those of the artists. This event is the first step in that journey.

My challenge, as leader of this project, was – and is – to bring together a group of artists that I met here in Edinburgh, and who shared with me an affinity of thought and feelings. The purpose of the exhibition is to make the work that emerged from our common preoccupations known to a wider public.

Aileen Paton, Jacqui Higgs and I have been discussing a joint exhibition since we first met at the Edinburgh Palette studios some years ago, and I’m delighted that the idea has finally come to fruition. I recently met the musician Giorgos Bouras and his work immediately intrigued me. He agreed to become the fourth member of our group and provide a sonic dimension to the exhibition.

Aileen Paton’s generally large installations are derived from magazine and newspaper pages. In these works, all the text is stripped out, and only the graphic layout remains.  The subtraction of the content in these pages leaves instead a kind of scaffolding that possesses a powerful visual impact.

Jacqui Higgs was born a painter.

She uses layer upon layer of oil paint glazes – evocative stratifications in an unmistakable palette. A narrative begins and images arrive through the act of painting and mark-making. In her process, many of the original thoughts and ideas will change or disappear, and the material itself becomes the protagonist of the scene. A hidden image emerges from the chaos of signs and colours, an image which dispenses with the original narrative, yet draws us inexorably into its world.

Giorgos Bouras’ intervention is a musical  Installation:’Tone Mosaic # 2’. This collage of  sounds derived from aleatoric processes uses four speakers each of which reproduces sonic loops of differing lengths. The slippage in sync that results from the varying duration of these loops produces unique and unrepeatable musical combinations.

Finally, I’ll let the words of Paride Chiapatti, art critic in Italy, introduced my own work (from a 1988 exhibition in Turin):

“… the vehemence of realization and the  liberating sense of the images … to which is added a drastic structuring and a simplification that is expressed through the use of an ordering orthogonality. A work, that of Cristina Beretta, played on a cold palette of violent intensity, full of a particular charm generated by the original mix, happily resolved, between strongly contrasting figurative elements. ”

Aileen Paton: I spent my most of my adult life living in Thurso, Caithness, where I taught at the local F.E. college. In 2010 I left to study fine art at Gray’s School of Art in Aberdeen as a mature student and graduated with a BA (Hons.) painting in 2014.  After graduating I moved to Edinburgh where I was invited to show at the RSW’s annual show as an invited student.  At their 2015 annual show I was awarded the RSW Watermark award.  I have continued to work from my studio in Edinburgh since 2014 and have exhibited in group and solo shows.  My work was exhibited in January 2018 at the SSA & VAS show, where I was awarded the ‘Deloitte’ prize for an artwork of merit.  I moved back to Caithness in 2019 where I continue to work.

My practice focuses on the concept of erasure, using newspapers and other publications.  My technique begins with a reductive process, excising text and images so that only the basic scaffolding of a newspaper remains.  For some of the pieces I have developed the process further by taking this fragile structure and distorting it, before building up multiple layers and reconfiguring them.  Just as the original newspaper or magazine was read, and variously interpreted by its readers, so this transformed ‘text’ is presented to be read and reinterpreted.

Cristina Beretta: I live in Edinburgh and work as a freelance conservator of wall         paintings.

I studied Painting and History of Modern and Contemporary Art at the Brera Academy in Milan. Before my long adventure in the UK, began in 1996, I lived in Turin where I showed my works in exhibitions of young  Italian artists during       and after the Academy. I continued to paint in my studio for the next ten years while working as a London-Milan art correspondent for an Italian monthly.

In my studio in St. Margaret’s  House, I continue my research by exploring and using     materials from the world of conservation and decoration. Among my many  interests, I specialise in traditional Italian scagliola techniques.   In 2018  I ran a workshop in these techniques, and was appointed mentor for practitioners of the craft among winners of the annual Inches Carr award. (SSA & VAS).

I have also organised workshops for UK conservators, in Italy and Scotland. I a passionate about natural wall finishes and historical plasters – Roman in the main – limebased.

My current works share a colour palette with paintings from my earlier career.  They also have in common an unstable line structure and irremediable contradiction between the horizontal and vertical.

Georgios Bouras: My name is Giorgos Bouras (also recording and performing under the name ‘go went gong’). I am    an Edinburgh-based Greek musician,       instrument maker and community musician exploring the possibilities of making music free of conventional time constraints. I studied Popular Music at       Napier University,      Edinburgh and had my first sound installation at St Margaret’s House in 2010.

Tone Mosaic #2 (2021) [Music installation] . ‘Tone Mosaic #2 ’ is part of a series of musical collages in which I explore aleatoric processes  and putting together a musical piece with minimal  human intervention, using technology to        approximate the   unpredictability of natural and   urban soundscapes. After selecting the notes of   the scale to be used by      rolling dice, I record a series        of single notes and     silence   on    various instruments (mainly my homemade stringed instruments). Then, I let a portable music player determine in what order the recordings will be played, creating a random mosaic of sound. Every performance is different and impossible to predict.

Jacqui Higgs SSA: I am an Edinburgh-based, Dublin born artist with a background in fine art and painting. Having graduated from Edinburgh Art College in 1994, I then moved on to study Art Therapy, gaining  a Postgraduate Degree in 1996. Over the past 2 years I have travelled northwards  to make on-site drawings & conduct research which I then use in my studio for larger and mixed media pieces.

These travels have invoked a deeper insight into issues surrounding climate change and societal  complexities, often exploring the interconnectivity between human/animal relations; and within this context  my destinations have become more adventurous.

The fantastic backdrops of oceanic panoramas,  fjords and sea stacks are  key to an abstract way of painting in which I add elements of printmaking  to the images.

For  the  ‘untitled2021’ exhibition, I have made on-site drawings from the following Highlands locations:

All the pieces are mixed media on paper and board.