No Woman is an Island | Rona MacLean & Aileen Grant 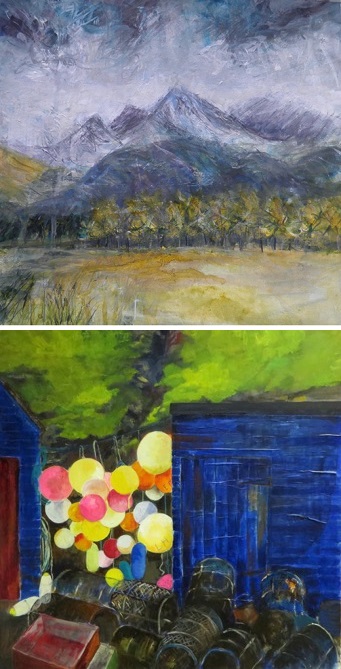 No Woman is an Island will feature paintings and handmade prints by artists Rona MacLean and Aileen Grant, both residents of St Margaret’s House and members of Edinburgh Printmakers. The work will feature Scottish landscapes, fishing huts, allotments and natural forms. This is the third year of this (popular) annual exhibition, and for the first time introduces several new artists to the mix.

Rona MacLean and Aileen Grant met at Leith School of Art and have supported and encouraged each other in recent years. Both have studios in St Margaret’s House and the  idea for the exhibition came through discussion and collaboration.  In developing the idea of a joint exhibition, the title ‘No Woman Is an Island’ seemed apt, reflecting mutual support.  It also alludes to Scottish islands – Rona’s name derives from the name of an island in the Hebrides, and Aileen’s name is similar to the Gaelic ‘Eilean’ meaning an island.  On another level, the work in the show will include several seascapes.

Many cities have a network of exhibiting women artists and it is hoped this could be the beginning of Edinburgh’s network. The timing of the exhibition has been planned to coincide with International Women’s Day on 8 March.