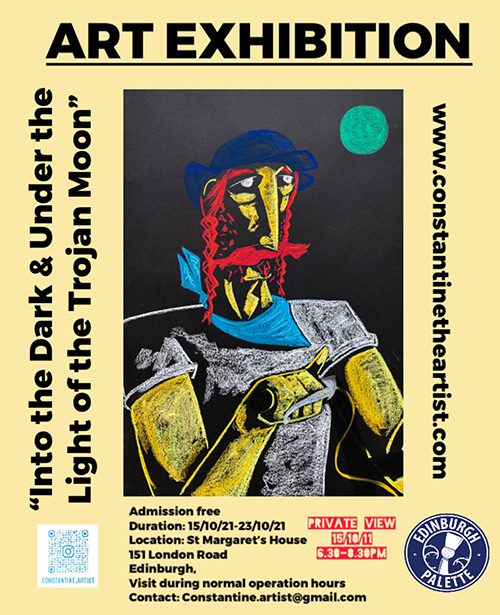 Constantine is a self taught artist, originally from Athens, Greece, but spent the last 12 years in Scotland. He moved to Scotland, as a young man to study Geology.. His first memory is that of drawing, which he carried on doing in his teen years, as well as exploring various others artistic and creative  disciplines and routes such as music, which he still does to this day too.

Throughout his University career he realized that Geology was really not for him and that life is simply too short to be wasting on things that have appeal to us. Then he made  the decision to just follow his true calling, ignoring other peoples’ opinions and go after what HE wants in life.

OVERVIEW: The importance of living in the moment. Reflecting on the past and contemplating about the future. Pondering upon making decisions that affect the future.. dwelling upon decisions that already have.. confidence and bravery, respectively derive. “Into the dark and under the light of the Trojan Moon”. Quick light and bold colours are to depict as such.