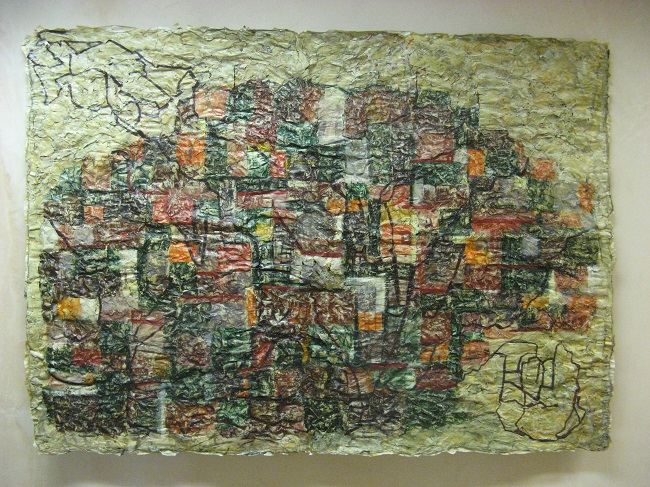 ‘Collective amnesia’ was originally a term that indicated how quickly we as a nation or group of nations forget. In other words, we never learn from history. Also termed ‘social amnesia’, it might be explained by our tendency nowadays to suffer from information overload, or ‘hyperconnectivity’. My piece entitled Collective Amnesia comprises multiple pages of TV listings.

On closer inspection, the text can be seen to have been erased and the remnants transformed into a form of textile which has then been woven into the resulting structure. The cumulative effect of wall-to-wall 24 hour available programming tends to desensitise us. Whether the programme was for our entertainment or designed to educate us is irrelevant: its impact is ephemeral and instantly forgotten.

My work focuses on the concept of erasure, using newspapers and other publications as source material. My technique begins with a reductive process, excising text and images so that only the basic scaffolding of a newspaper remains. For some of the pieces I have developed the process further by taking this fragile structure and distorting it, before building up multiple layers and reconfiguring them.

The process continues as I begin to apply – as well as erase – layers of paint. Just as the original newspaper was read, and variously interpreted by its readers, so this transformed ‘text’ is presented to be read and reinterpreted.

Aileen A. Paton was born in Glasgow, but spent most of her life in Thurso, Caithness on the north coast of Scotland. She graduated from Gray’s School of Art in 2014, where she studied painting as a mature student. Just after graduating, she moved to Edinburgh, securing studio space at St. Margaret’s House.

Although this will be her first solo exhibition, she was previously invited by the RSW as a new graduate of Gray’s School of Art to exhibit at their 134th annual exhibition.

Aileen says “Most recently, in December 2015, my piece Tree of Guernica, was selected by the RSW’ for their 135th show, where I was awarded the RSW Watermark Award. This award has given me the confidence to mount this solo show.”