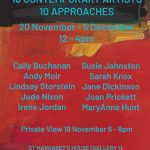 Liminal explores a diverse range of ideas and methodologies by 10 practicing artists. Working through the last eighteen months, mentoring sessions and group critiques led by artists and educators Matt Stornstein and Jill Boualaxai helped facilitate a commitment to creative practice and proved a catalyst for this exhibition.

END_OF_DOCUMENT_TOKEN_TO_BE_REPLACED 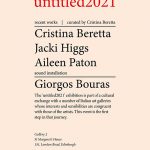 The ‘untitled2021’ exhibition is part of a cultural exchange with a number of Italian art galleries whose interests and sensibilities are congruent with those of the artists. This event is the first step in that journey.

My challenge, as leader of this project, was – and is – to bring together a group of artists that I met here in Edinburgh, and who shared with me an affinity of thought and feelings. The purpose of the exhibition is to make the work that emerged from our common preoccupations known to a wider public.

END_OF_DOCUMENT_TOKEN_TO_BE_REPLACED 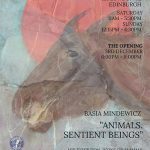 Art Exhibition of contemporary and traditional icon painting by Basia Mindewicz. An artist, icon painter and mentor to many students.

Basia “I wanted to express how I feel about the place that animals often have in our lives and how important is to me to talk about our relationship”.

END_OF_DOCUMENT_TOKEN_TO_BE_REPLACED

You can view an archive of our past online exhibitions below.

Tansy Lee Moir
Tansy is a visual artist based just outside Edinburgh, working predominantly in charcoal and pastel. Originally from Matlock in Derbyshire, she gained a BA Hons in 3D Design at Manchester Metropolitan University.  After working as a puppet maker and performer, she moved to Edinburgh in 1994 and spent the next fifteen years developing a practice combining art with a community development approach, working with marginalised communities throughout Central Scotland.
In 2008 she set up her studio in Edinburgh’s St. Margaret’s House to focus on drawing, developing a body of work inspired by trees. Since then she has exhibited widely across Scotland and UK and in 2017 moved to work from her purpose-built garden studio. She is a member of the Society of Scottish Artists.
Margaret Pitt
Margaret C.C. Pitt graduated with a B.A.Honours in Fine Art-Printmaking from Gray’s School of Art. The Robert Gordon University, Aberdeen, in 2003. She also has a B.A. Honours from the Open University in 1985. Courses for this degree were in Art History and Literature. She is a professional member of Visual Arts Scotland.
Margaret’s work has been exhibited widely in Edinburgh, London, Glasgow, Aberdeen & Aberdeenshire Galleries. It has also been purchased for the collections of local businesses/organisations including The Aberdeen Royal Infirmary, Viscom, Activ, Payroll and Fifth Ring.
Margaret went to Art School after retiring from teaching and since graduating has continued to produce and show work at her studio which is open to the public by appointment.
For enquiries or to arrange to view works in the artists’ studios, please contact Tansy mail@tansyleemoir.co.uk or Margaret margaretccpitt@btinternet.com

Tansy Lee Moir and Margaret Pitt
“This fruitful partnership resulting in the Out of the Wood exhibition was originally planned to be shown at Drum Castle from April until October as part of the regular exhibition programme.


Very familiar with Margaret’s work and being introduced to Tansy’s work by a colleague, I was delighted to be working so closely with both of them to curate the show and bring it to the Trust’s members and visitors. Sadly, the pandemic with which we are now all too familiar arrived. This meant that we could not install the show or allow the public inside to view it which has been a great disappointment for all of us.


I am delighted that Tansy has put together the exhibition online and hope that it will be seen and enjoyed by virtual visitors. I hope that many of you will look forward to visiting your local National Trust for Scotland property soon which needs your support now more than ever.”


Vikki Duncan, Curator North, National Trust for Scotland
Tansy Lee Moir - Veterans
This series of charcoal works depicts large old beech trees nearing the end of their lives. Their forms display the characteristics of weather, animal and human damage, with decay being a key feature. The drawings focus on the play of light across bark combined with the trees’ unusual structures. They remind us that although time takes its toll, beauty and strength persists.
Margaret Pitt - Single Plate Woodcuts
Margaret’s visits to Cyprus and Malta were inspirational and a year-long stay in Norway provided diverse images. She took part in a group exhibition in Galleri Kohl in Stavanger and has had solo exhibitions in the Galleri Krossen in Sandness.
Tansy Lee Moir - Phoenix Trees
A phoenix tree is one which has fallen in a catastrophic event, often blown down in a storm. If the tree still has some roots intact and in contact with the earth, it will continue to grow from its new horizontal position, its existing structures adjusting to support and sustain it for decades or even centuries to come. This series of oil, oil pastel and charcoal works made during the Coronavirus lockdown in the spring of 2020.
Margaret Pitt - Reductive Woodcuts
Archaeological images are frequently the reference for Margaret’s woodcut prints. This technique is one of the oldest forms of relief printmaking and thus appropriate to the subject matter. Sites in her native Shetland, Orkney and Scotland provide their distinctive shapes and use is made of plan sections, details of construction, and artefacts. Small sections are explored to give the abstract forms which are a feature of the work.
Tansy Lee Moir - Woodland Drawings
Over the last year Tansy has been exploring the Old Wood of Drum and discovering the trees which are a legacy of its history as a royal hunting forest.


“My frequent trips to the woods are partly open-minded wanderings, partly focused foraging and I’m always searching for trees which have a story to tell in their contorted forms, broken branches or undecipherable graffiti. Trees are constantly engaged in a dialogue with their surroundings, with the ground they grow in, the prevailing weather, the other plants, animals and people that live alongside them and there are physical clues in their forms that provide a record of that dialogue.


Similarly, the process of drawing is one of dialogue – it is a record of the interaction between the artist and the subject, the eye and the tree, the hand, the paper and the mark making tool. As John Berger says, a drawing of a tree is not just a tree, but of ‘a tree being looked at’.”