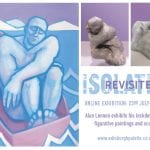 This is an online exhibition only and you can view it here: https://www.edinburghpalette.co.uk/events-2/exhibitions/isolation-revisited/

END_OF_DOCUMENT_TOKEN_TO_BE_REPLACED

You can view an archive of our past online exhibitions below.

Xanthe O'Connor
Life is such a beautiful endless learning curve and my journey has taken Xanthe through the magical world of Design, Theatre and Film TV Production (MSc.) Which enticed her to explore different materials and media platforms in story telling. As child she was always drawn to stones and crystals, it was this childhood interest that drew her to spend the past 8 years studying lapidary and making jewellery. She also held a fascination of the classical and mythical stories she heard as child, which brought about a marriage of the above skills. This fused into a longing to recreate tactile visual narratives of classical and mythical stories. Harnessed, by creating silver jewellery, gem stones, talisman and sculptures to represent characters, time and ambiance. Xanthe also appreciates that these metals and gems are precious gifts from the earth, and they also represents the inner beauty and uniqueness of the person wearing It or drawn to it.
Marcin Krupa
Marcin is a visual artist based in Edinburgh. He was trained as a sculptor but decided to expand his skills in other art disciplines such as drawing and painting. The predominant subject throughout his art career is a human form. He advocates in his works for Body Positive philosophy and celebrates beauty of different body types, gender equality and right to self expression. He explores taboo subjects in society and challenges social norms.
Constantine Zeus
Constantine is a self taught artist and author, originally from Athens, Greece. His first memory is that of drawing, which he carried on doing in his teen years, as well as exploring various other artistic and creative disciplines and routes such as music, which he still does to this day too.

Constantine first moved to Scotland as a young man, in order to study Geology. Throughout his University career though, he realised that Geology was really not for him and that life is simply too short to be wasted on things that have no appeal to us. He then made the decision to just follow his true calling, ignoring other peoples' opinions and go after what HE wants in life.