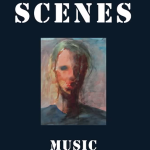 Martin Metcalfe is a painter who works from a studio within the Edinburgh Palette community. He is also the ex-singer for Scottish UK (chart) band Goodbye Mr. Mackenzie and USA chart band Angelfish (Feat Shirley Manson). He has a new book of images published…  but there’s more to it than that…
SCENES is a series of paintings by Edinburgh-based artist Martin Metcalfe. The exhibit includes poetic commentaries from Japan-based British writer Paul Hullah. Metcalfe and Hullah will supplement and extend SCENES by way of various multi-media performance events (live music and poetry, with visual enhancements) in Edinburgh over the summer (dates to be announced) and, thereafter, it is hoped, internationally, in order to creatively readdress and reassess the exhibition and concept and bring this new and original artwork to a wider audience.Metcalfe’s art is rooted in Modernism. In particular, he consciously savours and upholds the freedom that German Expressionism bequeathed to bolder painters. Hullah’s poetry inhabits a similarly liberated, adventurous perspective. Poignant and candid, SCENES creatively maps a period of Edinburgh’s history during which both were able to view and interact with the striking people and events documented here first hand.

SCENES dramatically and emotively recreates experiences of the subcultures and cliques of an important but woefully undocumented era in the Capital’s history: 1979 to 1989. During this time of outsiders, insiders, and loners, the city housed a vibrant, fecund musical creativity, which has been ignored by both mainstream and underground socio-cultural and artistic histories of the 20thcentury.