Edinburgh Palette is governed by a Board of Trustees. Our Trustees are responsible for providing strategic direction and ensuring effective governance is in place for our longterm future.

Our Current Board of Trustees

Chair of the Board of Trustees.

Stephen grew up and was educated in Edinburgh. He started working for a number of large corporates including the Royal Bank of Scotland and Scottish Power. After some time away from the city and on completion of his Masters he changed his focus to working for and leading a number of SME’s as he felt he could make a greater difference.

Whilst honing his skills in the business sector, Stephen devoted voluntary time as a business mentor for two separate businesses spinning out of Edinburgh University, as a Non-exec for Business Gateway in Fife and as a member of the commercial committee at Scottish Golf.

Stephen is keen to help in developing the Charity at all its locations. He fully understands the benefit that Edinburgh Palette can bring to individuals but also communities in general. He enjoys learning and taking on new challenges and sees his role as a positive one supporting local artists, charities and individuals in a safe and inspiring environment.

Stephen relocated back to Edinburgh from London in 2013 after a 25 year period of study and work in the property and construction industries. He was a director of Guildhouse UK between 2001 – 2012, responsible for delivering major private and public sector projects. Currently now working for Robertson Capital Projects providing strategic support and promoting collaborative opportunities for a wide range of public sector organisations. Stephen is also a non executive board director of Castle Rock Edinvar Housing Association.
Stephen is passionate about creating sustainable environments that enable people to thrive and communities to flourish by considering the development and delivery of Service provision more holistically. He understands the impact that employment, housing, education, health services, social care, leisure and creative outlets have on the general well being and prosperity of individuals, families and communities.
Stephen has been involved in lobbying government about improving the integration between public  sector organisations themselves and increasing the participation of communities in prioritising and designing the services they need. He understands the contribution organisation such as Edinburgh Palette make in generating economic, creative and social benefits for individuals and the wider community by providing  artists, charities and local groups with safe, accessible, affordable and inspiring space to develop their ideas, collaborate and showcase their work.

Dale is the founder of Edinburgh Palette following a number of highly successful years in the hospitality industry where building management and facilitation were central to his professional life. Beginning the project on one floor of St Margaret’s House, he has successfully steered and expanded Edinburgh Palette to a further three locations in the city, one of which is firmly established at 525 Ferry Road, with two others currently in development.

Dale is a champion of innovation and incubation, building strong links and friendships with a wide variety of tenants and organisations, and a keen follower of music, culture, literature and history. You may often hear his tune(s) for the day filtering through the Third Floor offices and Galleries at St Margaret’s House. 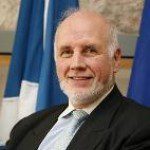 Grahame was educated at the Bradford Boys Grammar School, various colleges and Leeds University. After being brought up in the retail trade, he turned his back on the family business and joined the Rank Organisation, quickly becoming their youngest general manager in their Leisure Division. After three years he transferred to the Theatre Division where he stayed until early retirement in 1999. He was based at the Odeon in Clerk Street, Edinburgh, for his last ten years. Besides his routine business work of managing a multi-million pound business he specialised in premieres, events, marketing, advertising, business development and management training. His most memorable achievement was hosting the ‘world premiere’ of Rob Roy, a spectacular three day event culminating in the star studded premiere itself. During his time at Edinburgh he was also the Chair of the Scottish Cinema Exhibitors Association, (CEA). Two weeks after retirement Grahame was bored so took employment with the Scottish Parliament from March 1999, where he worked for a further eleven years as a Liaison Officer in the Presiding Officer’s and Chief Executive’s office. Here he was involved in planning and hosting VIP visits to the Parliament and major events, together with organising cross party out-going visits for MSPs around the world. He also sat on the Parliament’s Health and Safety Committee and is currently Chair of the Scottish Parliament’s Retiree Association.